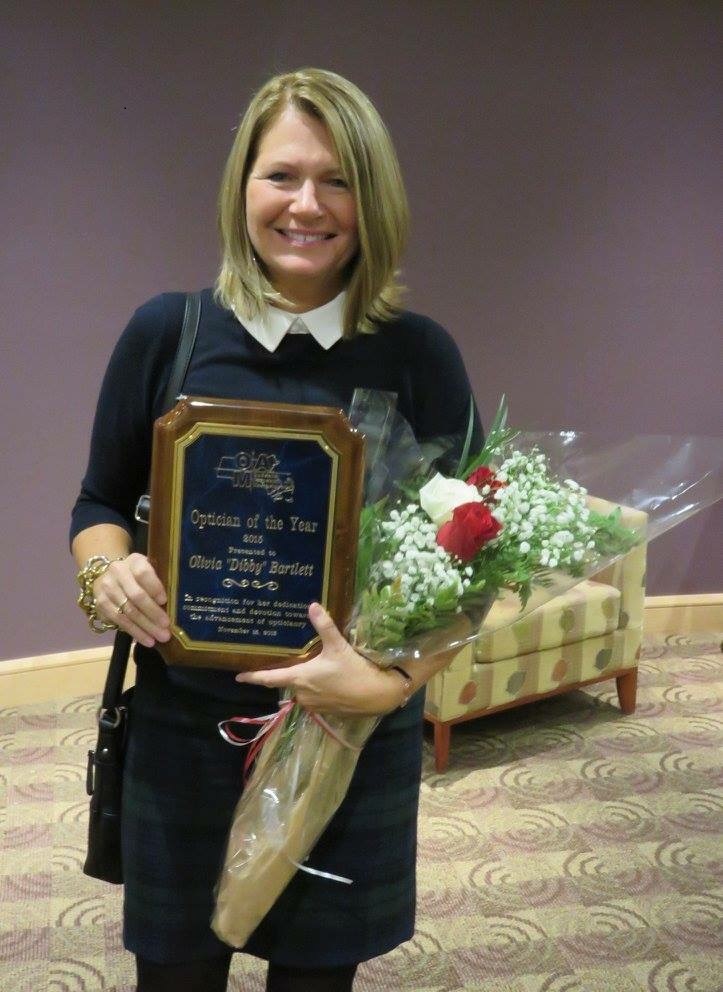 The Opticians Association of Massachusetts is proud to recognize its members as some of the most dedicated and active in the nation. Winners of our annual awards are stand-out individual who contribute in a meaningful way - both to our association and to the field of opticianry. We congratulate these individuals on their achievements, and thank them for their service to our organization, to our profession, and to their patients.

It is with great pleasure and honor to present the OAM 2015 Optician of the Year Award. This OAM award annually recognizes a Massachusetts optician for outstanding  and significant contributions and achievement toward the advancement of opticianry.
I am very excited, pleased and honored to announce that the 2015 OAM Optician of the Year award goes to Dibby Bartlett.
2015 has been an exciting year for opticianry, both here in Massachusetts, as well as nationally. Much of the excitement is due to Dibby's dedication and passion to promote and advance our profession.
Since January, here is a partial list of Dibby's many achievements and contributions.
She was instrumental in securing a sizable grant from the ABO/NCLE that ensure that students and apprentices from all over the country  could be eligible for a full scholarship to attend the OAA Leadership Conference. At the 2015 conference, more than 20 students  and attended the conference in Las Vegas, and in 2016more than 25 students, ,5 from MA, will be in attendance due to Dibby's  great and inspiring work.
While at Leadership, Dibby facilitates breakout sessions on student involvement, leadership development and national issues challenging our profession. Students and apprentices are offered as student position on the State association BOD, as well as a student position on the BOD to the OAA.
Dibby continues to serve on the OAA Branding committee, a committee which she helped formed four years ago. This committee meets on a monthly basis and has produced the American Optician Video Contest, a national opticians logo, a national "Smart Choice" campaign, and an opportunity for a national grant available to state associations to market our profession.
Throughout this year, Dibby has represented our interests at the national collaborative council on opticianry, a coalition of all facets of opticianry who are working together to form a national strategic plan for our profession.
Dibby is a primary contributor to the American Optician On-Line magazine.
Dibby is a faculty member at BFIT, now teaching two courses in the opticianry curriculum, and serves as a member of the BFIT advisory committee.
We all recognize Dibby for her most significant contribution... her giving so much of herself for others. Dibby's greatest investment, is her investment in each one of us. Beside serving as OAM Past President, she has mentored and coached scores of MA apprentice opticians and BFIT students... including her daughter, Martha!!!
So it is with great honor that I present to you the recipient of the OAM 2015 Optician of the Year, Olivia "Dibby" Bartlett